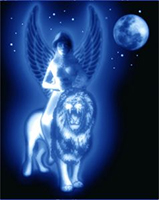 Once there was a great empire that dwelt between the Tigris and the Euphrates Rivers:  the Empire of the Sumerians.  One of the greatest cities of Sumer was Ur, near modern-day Basra, Iraq.  Sumer flourished in the Fertile Crescent some four millennia ago.  The Kings of Sumer ruled for more than a thousand years, and the people between the rivers developed a lively, intelligent culture that echoes down through the ages.  Among the Sumerian pantheon of gods and goddesses was Inanna, Goddess of Love – who became the prototype for the later Ishtar and Isis, Artemis and Venus.

Seven Dreams of Inanna is a timeless love story in the grand tradition.  It is the tale of Klori, daughter of King Mesan, and her lover, Kesh, heir to the usurped throne of Lagash.  It is a tale of intrigue and danger, of heroism and courage, of adversity and redemption – a story that unwinds amid the sun baked brick buildings and colorful tapestries of ancient Ur, where ziggurats rise to meet the cloudless sky and sharp daggers are forever poised against the unwary.  It is a story that takes place at the dawn of recorded history; and yet, one that still resonates today.  For it is a story that is replayed each generation, and one that will continue for so long as love endures.