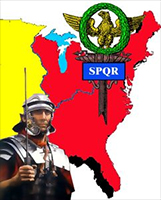 Imagine a world where the Romans discovered and colonized America some 1500 years before Columbus, a world where the colonists of Americum revolted against Emperor Tacitus rather than King George III, and where the Declaration of Independence was signed on the 4th of Julius 276 AD.

From discovery to freedom and all things in between.