The Chalice of Souls 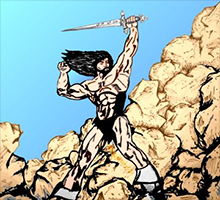 Mandar, the mightiest warrior of the ancient continent Tharvus, before the dawn of history, is launched into an odyssey by the gods known as the Five Lords.  The Seven Deviants, a rival group of gods, has deemed that all life on Tharvus must end.  They have stolen the power of the Five Lords, which resided in a golden chalice and empowered their human agent, the wizard Vul, to destroy it.  Mandar, the savage barbarian, armed with the Doomweaver, an indestructible broadsword from the Five Lords, is thrust into a war between gods that he has no desire to take part in, with the future of mankind the prize and Death as his only ally.