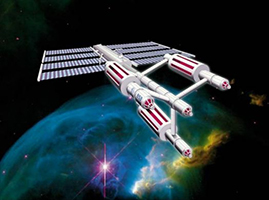 When scientists discover radio signals emanating from a planet orbiting one of the stars in the Centauri System, the President of the United States orders Operation Bold Stroke, a mission to send a ship to investigate.  The ship is the Prometheus, a colossally expensive gamble using unproven technology.  The project is not the well-oiled machine much loved by writers of escapist fiction.  The sponsoring nations balk at the cost, and crew selection falls prey to political infighting.    Prometheus's commander is Glenn McCarran, a controversial choice, and not only because he is a convicted murderer pardoned by the President for the mission.  The rest of the crew consists of a French scientist and two women, a Russian cosmonaut and an African-American astronaut -- none of whom trust each other or their captain.  Then there is the ship's computer, a self-aware automaton with powers unknown to the human crewmembers and a personality of her own; a personality, it turns out, that is not completely honest.

Yet, with all of its shortcomings, the Prometheus mission is the most important exploration ever launched.  For on its successful conclusion rests the future of the human race.