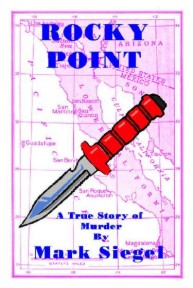 She felt great, loose and comfortable. Smiling as if she did this every day, she reached into the black purse for its final secret. The black metal ball the size of her fist was hooked to a chain. It had seemed like a good idea the night she had her friend steal it for her off the wall of the El Capri. Not as good as a gun with a silencer, maybe, but more personal, more appropriate for personal business. She crept up on the back of the house. On the arid little patio, she picked up the big, bent nail that El Negro had showed her how to use to flip up the little hook that held the screen door shut, smiling to herself at how easy it was. Without thinking about it, she put the nail back down and picked up the Diet Coke again. Carefully she pushed the door open and slid through. Danny and the kids could come back at any minute, she thought. What would they do? Would he help her kill Trish? Would he stop her? Would he turn her over to the police? Would he hurt Yesenia for trying to hurt his wife, take the mace out of her hand and beat her with it? If Trish saw her there, would she finally realize how determined Yesenia was and simply give Dan up to her? All Yesenia knew for certain was that a bomb was about to explode in their lives. She moved into the room. The fuse was lit.

Trish was lying on the bed right in front of her, one of those Matol magazines stuck in front of her face. Yesenia was thinking maybe she would sell that crap when she became Danny's wife, somebody would have to take over, after all - when Trish sensed someone else was in the room. Trish looked up and saw her husband's crazy lover standing next to the bed wearing a ski mask and carrying a Diet Coke, something else in her other hand. Trish was a head taller than Yesenia and in pretty good shape, but before she could rise off the bed, Yesenia wound up with the mace and swung it sideways with all her might at Trish's head. The blow knocked the bigger woman straight back into the bed. Blood sprayed onto the mattress and the wall behind her. She seemed unconscious. Yesenia hit her again and again, now swinging the mace from behind her head, using all her force. A terrific sense of power flooded her. At last it was happening.

On the afternoon of February 23, 1991, Trish Willoughby was brutally murdered in the Mexican tourist town of Rocky Point. Yesenia Patino, the transsexual lover of Trish's husband, Dan, confessed to this murder and is in jail in Mexico. But in the United States, Dan Willoughby was convicted on the same crime, and is on death row in the Arizona State Prison at Florence. For years, a legal battle has raged over whether Willoughby ought to have a new trial. In this book, Mark Siegel, an author and attorney, presents some of the evidence on both sides, particularly evidence that was never heard at the trial, much of it from the parties and witnesses themselves.