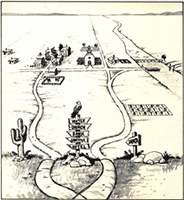 Seven flags have flown over Texas territory: the flags of Spain, France, Mexico, Texas Republic, Confederacy, United States, and Republic of the Rio Grande.  Blood of the conquering races mixed with the blood of Indians and created extended families with a variety of roots.  This story is about such a family who lived on the banks of the Rio Grande and left a turbulent legacy for a Texican named Dan Jarvis.

Dan left home as a boy and survived everything life brought his way, from fighting in the Civil War to scouting out west.  When a drought threatened his ranch home, he went back to Texas.  He won the fight against nature, but facing the conflicts within his extended family and standing up to murderous gold thieves would take all that even Dan Jarvis could muster.